Ok let me declare that I am a self-confessed gadget addict. Gadgets come to my collection in any forms and sizes and range from camera gear to laptops to hybrid computers to smartphones. But smartphones have been the mainstay of the gadget cycle. I have stopped count of how many times i have changed my phones.

I had initially fallen in love with samsung phones starting with the OMNIA HD for its unique amoled screen, symbian operating system, then it followed with the Omnia Windows mobile pocket pc phone. The true samsung phone that delivered way above its size was the first gen Samsung Galaxy S phone. Super screen and excellent battery for video playback.

So over the years I have mostly settled for the S series and Note series in the samsung line up. But Samsung does a criminal offence in loading so many duplicate apps that a consumer doesnt even get the time to check them out as we are already using the similar Google apps. So over the years i used to ignore all the Samsung pre-loaded apps and stick with my tried and trusted apps. There is a risk attached too in getting used to manufacturer made apps, You get tied to the brand and its difficult to change the habits. Just look at how many iPhone users resist change to another OS or brand just because they are addicted to iMessage. It sounds ridiculous to non users and there are thousands of trollers from either android or ios platform mudslinging each other. I would say to each his own.

But in the above scenario Samsung have made an app called Samsung Pay. I opened the app on my S7 edge and then closed it thinking it to be just another WALLET APP since Indian market is flooded with wallet apps. I had heard of the NFC payment possibility at toll gates etc but I never thought India has reached that level of development. So I stayed in dark for few years at least of the technology behind Samsung pay.

Till recently my colleague told me that it works with most handheld debit/credit card machines. I was really puzzled and even felt pity on myself since I was always tinkering with my phones, rooting, jailbreaking, loading custom roms, applying hacks and what not since Windows Mobile/Pocket PC days.(Yes your beloved XDA-DEVELOPERS site was named after the O2 XDA branded phones since 2002 and not for Android custom roms and I had used and manipulated almost all the O2 carrier phones, the last one being the mighty O2 XDA-EXEC and HTC HD2).

So i just opened Samsung pay and fed one of my debit card into its memory but never used it even though i had many chances at malls etc. I preferred to stick to my debit card swiping.

So now coming back to my experience. So this happened few days back. I drive 30km to my place of work daily. Just before i reach my workplace my car throwed me a warning message into the dashboard. LOW FUEL!!!

I was still 8km from my workplace. But i just thought to myself that I will fill the tank while returning. Now i reached my parking lot and first thing I did was check my back pocket for my wallet but alas i had left it at home!!

I had No Cash No Card

Now the whole day I was contemplating from whom to borrow. I was new to this place and dont know many. The only 2 persons whom I knew were on leave. So after lot of thought it clicked to me that let me try the Samsung Pay for its litmus test.

If it fails then I fail to reach home!

I scanned all youtube samsung pay tutorials and prepared the app to see everything was working. Now at evening I started back home. Moved into the nearest petrol pump. I asked the petrol pump guy to first take the money and then fill the tank. He was completely baffled. He called up his senior to cater to the psycho guy(thats me). I had to come out of the car and explain to him to bring the debit card machine and i will make payment first. He also confusedly accepted and bought a very old looking fat debit card machine(I was cursing my luck, out of all the days cant you bring those newer sleek machines that i see daily, why today). Now i was skeptical and praying to god that better samsung pay work or else i would look like the chimpanzee straight out of a zoo. Half the petrol pump guys had started looking at me by now. I brought my Note 8, swiped up from lock screen itself to bring up the Samsung Pay and moved my phone closer to the old fat machine, for 5 seconds there was silence and then voila!!!!! It accepted my debit card and asked to enter the amount. After that I entered my pin and done. Payment approved. 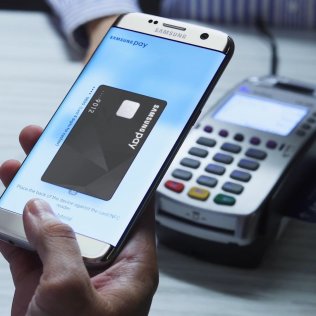 NO CARD, NO SWIPING, NO HASSLES. WIRELESS, CARDLESS PAYMENT WAS DONE!!!

The petrol pump guy was wearing a shocked looked and then burst into laughter looking at all his team mates. He shouted telling them what technology has come man!! Gave me a great smile of appreciation. I felt like I was having some supreme power 🙂 I was a HERO

THANKS AGAIN SAMSUNG PAY, YOU SAVED MY DAY AND MADE ME A HERO 🙂